blog # 6 Agoraphobia, the fear of squares 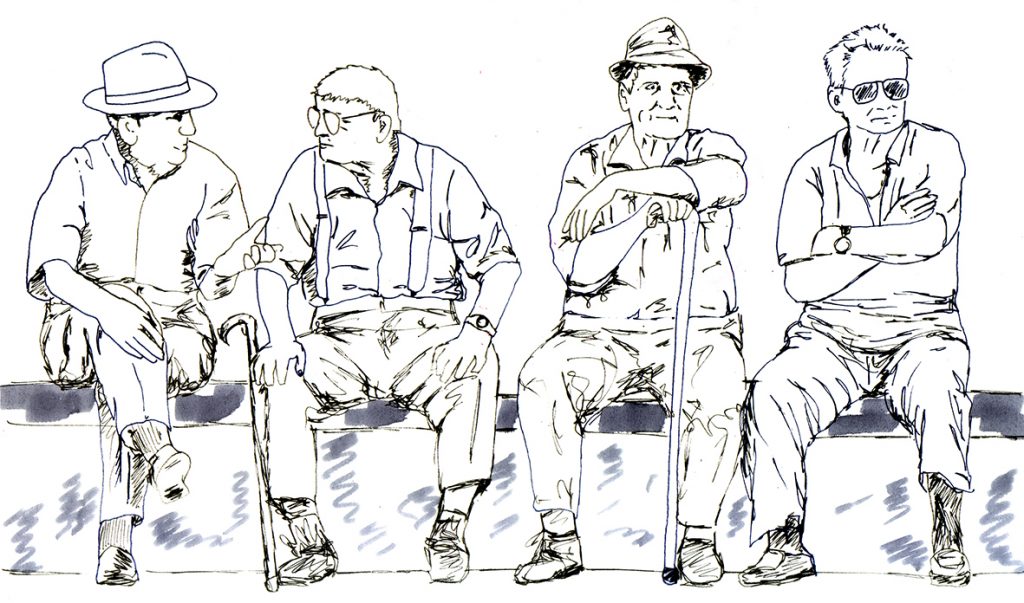 The image that pops up in my mind when I think of a square is of a place that is the nucleus in the urban life. Where chatting old man sit cosily on a bench. Hat on, the crooked legs somewhat apart and a walking stick in between. Tall stories are exchanged, they are laughing and still have a naughty look. Kids run around, playing tag. A group of teenagers lingers in the corner of the square, nonchalant and cool. Next to the fountain stands a couple in love. They only have eyes for each other. Neighbours meet in the middle of the square, they stop and exchange the latest news. In my imagination, this is a place for spontaneous meetings, of seeing and being seen. Also, the weather is always warm and sunny. Because I picture such a place in a Southern European country. Thinking of Dutch squares I think of empty, grey and stony areas.

Square-people
Why don’t Dutch squares have the same urban position as the Southern European ones? What’s the reason for this? And would it be possible to give the Dutch squares some of the Southern Joie de Vivre? I always thought it was a climate thing. If the weather over here would be just as lovely, our squares would be lively as well. Nevertheless, when the temperature rises above 20 degrees Celsius all Dutch people head out. The streets become busy, the terraces overflow but the squares remain empty. Are northerners no square-people? Or do squares have a different function in our perception? Or are Dutch squares designed in another manner and is that the reason why they are used differently.

Empty places
In the Netherlands, squares have a different function. Instead of places where the community comes together, they are just functional places. They are empty places that give room to the market and the fair. Dutch squares are emptier than the Southern squares. But people don’t like empty expenses. This is something that has to do with a pre-historical remnant. At an empty plain we feel exposed; in the event of an attack, there is no place to seek cover. Intuitively we don’t like walking on an empty square, let alone sit down and have a spontaneous chat with someone.

National character
Pragmatism is built in the Dutch DNA. A Dutch square is no-nonsense, without frills. The Dutch won’t feel an emotional closeness to a square. In the Mediterranean, squares provide in a connection with the local history. It´s the place for historical events and where they are commemorated. At many squares, you can find a statue of a someone who did amazing heroic deeds. A hero of whom everyone knows. In the Netherlands, you can also find bronze horses with a rider on its back. But I bet you that 99% of the Dutch, myself included, have no idea who is so proudly represented. Mediterranean squares are also places for traditional feasts. Celebrations that only are held in this particular city or region. This strengthens the square’s significance in the people’s perception.

Old men
Pragmatism is good. Problems get solved, things go smoothly and it avoids wastage. But pragmatism also needs a counterpart. Because life is not complete without feelings, attention and a little romance. The same is true about squares. Now too many Dutch squares are empty and holes in the urban fabric. They are places for acute agoraphobia, the fear of squares. For these squares, a binding identity is needed. A design that gives a sheltered feeling and that is inviting to stay. A couple of Dutch squares have made a step in the right direction. These are the squares with cafés and terraces. But staying at these squares is linked to a commercial activity. They are not inviting for everyone. And that something that they should be. Because when the sun breaks through, I want Dutch squares to be full of life and where you can find old men bragging and telling tall stories to each other.